The mountain world south of Munich is popular with visitors as well as with snow hares, chamois and rare birds. Rangers are on duty to ensure that the wildlife remains undisturbed. In addition to fitness, they must have patience. We accompanied them on touring skis ... Text and photos: Dietmar Denger

In the early morning, the banks of fog quietly push their way through the powdered spruces around the snow-covered Lake Spitzingsee. They glide between the steep flanks of Mounts Brecherspitze and Jägerkamp over the Spitzingsattel down into the Alpine foothills.

Like a wide mountain river of milky glacial water. On the lakeshore, a fox is just finishing its night shift, pawing through the fluffy snow with conspicuous composure. He seems to enjoy the peace and quiet. As an insider, however, he knows what is about to happen.

On a sunny Saturday morning, after the people of Munich have finished their second latte, got into the car and joined the caravan heading south, addicted to the mountains, it can get crowded a little later around Lake Tegernsee and Lake Schliersee. The summit round at the somewhat higher, snow-sure Spitzingsee is even more popular and more frequented in winter.

Ski tourers and snowshoe hikers in particular trudge towards freedom beyond the tree line. The fox has long since disappeared into its den, but it can be tight for the black grouse and capercaillie. Only the sparse mountain forest zones away from pistes and alpine pastures offer protection to the shy giant birds. This is the terrain that looks so good in the video when skiing the first tracks.

Early in the morning at Lake Spitzingsee, 1,084 metres above sea level

Ranger Credo: Information Instead of Instruction

At the sight of freeriders, the black grouse probably ruffles every one of its distinguished-looking black feathers and the rooster’s bright red comb swells. Fortunately, however, the mountain game have been blessed with a nice security presence for some time. On the initiative of the Tegernsee Schliersee Alpine Region, a team of rangers swarm out at weekends, focusing on information rather than threatening instruction to protect the wildlife.

The dreamlike view stretches from Munich to Mount Zugspitze

Antonia Rüede-Passul is assigned to the Jägerkamp. The mountain with the fantastic view that stretches from Munich to Mount Zugspitze is one of the most frequented mountain destinations in Bavaria. With touring skis, we have been shuffling towards the sun for an hour on wide alpine pastures.

“It's going to be a long day,” the ranger predicts, looking up at the deep blue sky and the first large group of ski tourers further down. From a distance, it looks like a troop of worker ants.

In her main job, as climate protection officer at the Miesbach district office, the biologist and enthusiastic mountain sportswoman is involved in her part-time job almost every weekend. But she does not want to be seen as a summit policewoman. Instead of condescending admonishments, a friendly plea for understanding is called for.

Ranger Antonia at one of the signposts for ski tourers

View from the Jägerkamp onto Lake Schliersee and the Pre-Alps

“We rangers make people aware of the sensitive wildlife and the existence of game and forest sanctuaries, explain background information and give tips on how to quickly and easily include sanctuaries in tour planning,” she elaborates during a short breather. And she would always have alternative routes ready. Extremely good knowledge of the area is helpful.

The importance of visitor guidance in order to leave nature its refuge is obvious at the Jägerkamp. It was less than three days ago that a snow front freshly flaked the entire mountain half a metre high. But for a long time now there has hardly been a metre that is not covered with tracks, neither on the open areas nor in the steeper flanks and forest zones.

Black Grouse Roost at the Edge of the Quarry

Around 9 a.m. we arrive at the site, the saddle just before the Jägerkamp summit. It is too tempting to walk the last few metres from there, very close to the edge of the cliff, where the view stretches far to Munich and beyond.

But of all places, this lookout box was chosen by the black grouse and its harem of chickens as their winter quarters, as traces in the snow prove. “It’s a very sensitive area,” says Antonia, to which she immediately draws the attention of the first snowshoe walkers who reach the small snow plateau. “Have you heard about the protection zones up here?,” she asks the two students from Munich who have taken advantage of the beautiful day to go on a mountain excursion. They did; in quite exemplary fashion they studied the summit on the internet from home.

That pleases the conservationist. Her reference to the trail marking that separates the recreational area from the protected area from here to the summit is gratefully received, as is the flyer.

“The reactions are overwhelmingly positive,” says the ranger, who repeatedly experiences how important her work is: “Many people don't know that there are protected areas and therefore go in unaware.”

Although there are large information signs at the entrances to the most popular routes and at the rest areas further up, even these are often still overlooked. The active approach is therefore aimed primarily at the most whimsical mountain sports enthusiasts, but not exclusively. “Most are very happy to learn more and gladly accept alternative route recommendations.” Others listened patiently, but with only moderate interest.

And of course problems do arise from time to time. A certain frustration tolerance is necessary, Antonia knows from experience. Not all of the people she talks to are cooperative. Some react negatively for a variety of reasons. “They often have the feeling that they are no longer allowed to do anything at all. Even the leash ban for dogs in the mountains is accepted by the four-legged friends without complaint, but not always by their owners.

Nearly 30 Rangers are Patrolling the Area

The mountain is calling louder than ever: since Corona, outdoor sports are booming, the Alps are literally overrun. Especially around the so-called Munich local mountains between Wendelstein and Tegernsee, things are getting tight. “It is all the more important that we are also prepared to make compromises, to show consideration for nature and animals, so that we can preserve this unique ecosystem,” Antonia thinks.

What is really annoying is the small fraction of mountain Rambos who deliberately disregard instructions and commandments. In those moments, she sometimes wishes she could do more than just inform. She and her up to 26 colleagues who patrol for the Alpenregion Tegernsee Schliersee as a part-time job are not allowed to sanction blatant violations of the rules.

More Images of Our Wintry Tour

Tourers, skiers and snowshoe hikers are drawn to Lake Spitzingsee

Antonia Rüede-Passul does the ranger job on a voluntary basis

Signposts for hikers and ski tourers ...

At the finish: Ski tourers on the Jägerkamp

Success Story in Summer and Winter

Only the two full-time rangers who have been with the Miesbach District Office since summer 2021 are licensed to do so. “From my point of view, sanctioning should never be the first step,” says Thorsten Schär, whom I meet a little later at the valley station of the Taubenstein, the starting point of the tours on the Jägerkamp.

"Most of the mistakes are due to ignorance and not intention"

The Managing Director of the Alpine Region Tegernsee Schliersee was a co-initiator of the ranger project in 2019 together with the Lower Nature Conservation Authority and the Mangfallgebirge Area Management and is responsible for coordinating his protégés. “As an interim conclusion, we can say that most of the mistakes that guests make are due to ignorance and not intention.”

“While we are not a nature or national park,” says Schär, “it is still very important to inform and welcome our guests about the region, nature and also about safety aspects. Together with the district administration and our municipalities, we wrote to the mountain guides, tourist and local history guides, herbalists, DAV sections and ski schools, and we soon had a large distribution list.

After a few meetings and training sessions, we now have 26 rangers working for us.” Last summer alone, more than 15,000 conversations were held on 50 mission days within three months, says ranger team leader Schär.

"There are now 26 rangers working for us".

Summit cross on the Jägerkamp (1,746 metres) with a view of Lake Schliersee

Ranger as Safety and Route Advisor

The combined expertise can also answer questions about safety and provide hiking or snow tour tips. “The information on the forest-wildlife conservation areas is gladly accepted, but many visitors also specifically ask for the right trail at the summit destination or for basic information on the region or tour,” Schär is pleased to say.

By now it is evening. From the motorcade back towards Munich, the last taillights disappear. It starts to snow heavily at Lake Spitzingsee. The calm has returned. Perhaps the fox and the snow hare are about to wish each other good night. It will be quiet for a few hours now, then the first tracks will be made through the snow again on the Jägerkamp, probably still in the light of the headlamps.

Fancy a "moonwalk" in the Bavarian Forest?

Read more
Considerately Through the Winter in Bavaria 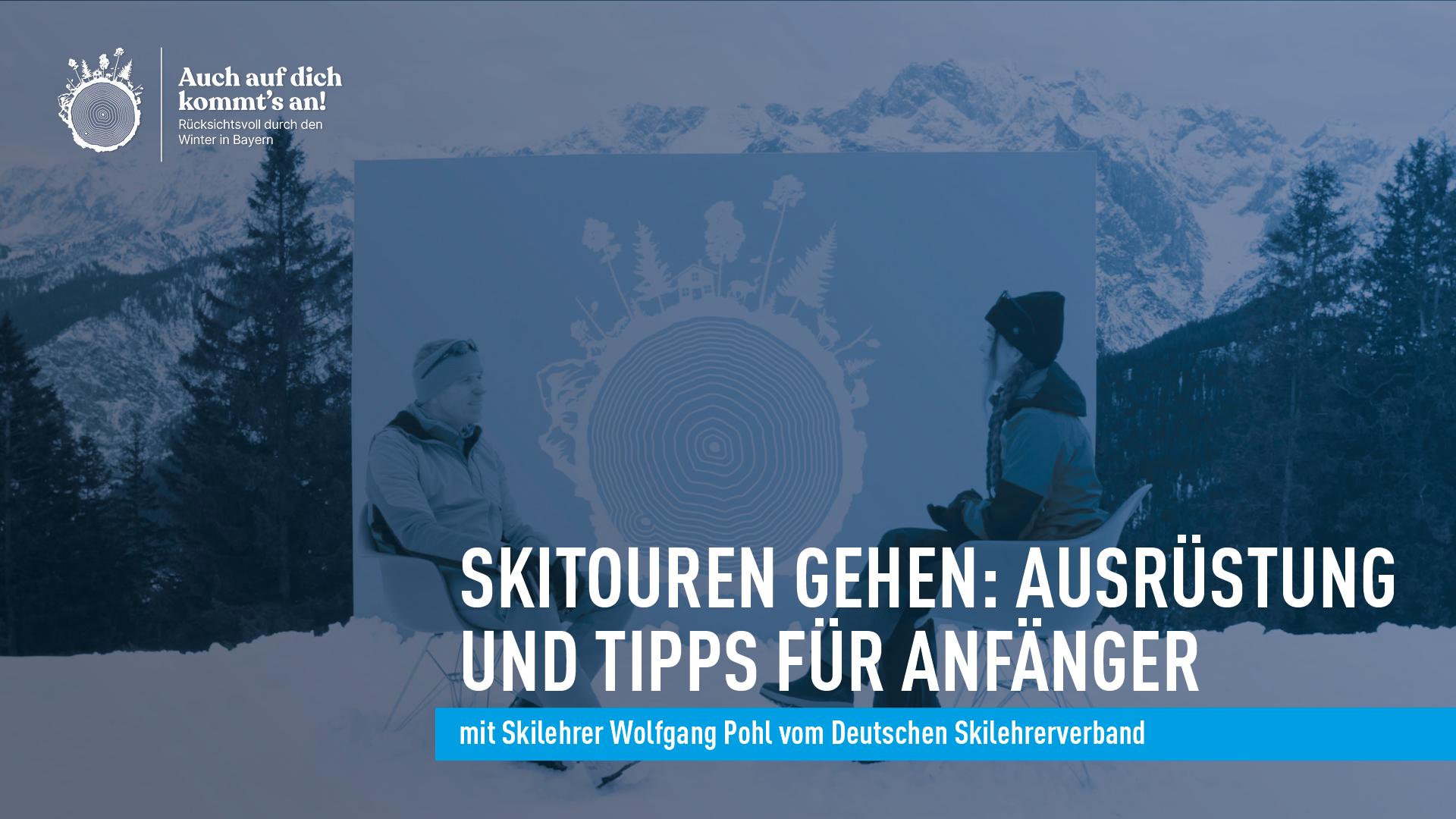 To protect your data, we use a so-called two-click solution. The cookies from YouTube and Google Maps are deactivated by default and are only loaded from the respective servers after you click on the "Accept" button. You can then view the content. By clicking, you agree that your IP address is transmitted to YouTube or Google Maps and that the provider sets cookies in your browser. For your convenience, we remember your consent for 1 year via a so-called local storage object that we save in your browser. Of course, you can also remove this object yourself in your browser settings if you do not wish to do so.

The differences between alpine skiing and ski touring are immense. Whether equipment, descent or the simple movement: Ski instructor Wolfgang Pohl from the German Ski Instructors Association gives tips for beginners.

To protect your data, we use a so-called two-click solution. The cookies from YouTube and Google Maps are deactivated by default and are only loaded from the respective servers after you click on the "Accept" button. You can then view the content. By clicking, you agree that your IP address is transmitted to YouTube or Google Maps and that the provider sets cookies in your browser. For your convenience, we remember your consent for 1 year via a so-called local storage object that we save in your browser. Of course, you can also remove this object yourself in your browser settings if you do not wish to do so.

More Stories About Winter in Bavaria

Big round eyes, fluffy fur, a gentle, curious nature. Alpacas are in demand as laid-back hiking companions. We had to try it out

Around the Ochsenkopf in the Fichtelgebirge there are several hundred kilometres of trails for cross-country skiing, touring and snowshoeing

Our reporter took the premium winter hiking trail near Reit im Winkl from the “Hindeburghütte” to the "Hemmersuppenalm" under his boots.

Read more
In the snow with...

We met the three-time Olympic champion in speed skating for a decelerated winter hike around the icy Frillensee Lake.

Full moon snow shoe tour? It sounded so exciting that our reporters immediately set off for the Nagelfluhkette Nature Park in the Allgäu Alps.

Between the Großer Arber and the Brotjacklriegel the Bavarian Forest shows itself as a perfect area for snowshoe hikers.